Proximal hamstring tendinopathy and how to treat it effectively 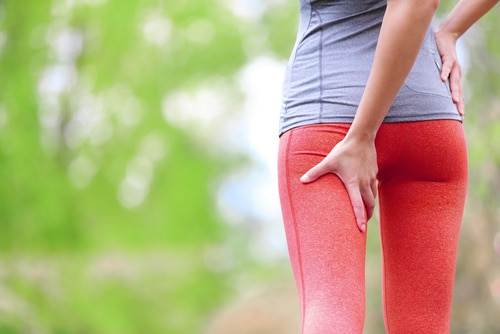 Proximal hamstring tendinopathy, another pain in the bum

Proximal hamstring tendinopathy (PHT)  is another true pain on the bum. It can  also be a tricky customer to diagnose and a stubborn one to treat. It is usually associated with a deep ache / pain felt around, where the glutes meet the upper thigh at the ischial tuberosity.

It is common injury found among distance runners and sprinters / hurdlers as well as this e involved in  sports that require cutting and sudden change-of-direction when running eg football codes. However it also a condition that can  affect the non sporting population and can  be associated with repetitive deep squatting , lunging and sitting.

In the sporting population the following factors may play a role in the development of PHT and may come down to too much load applied too soon creating too much compression at the tendon. 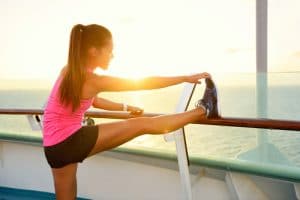 How do I know if I have proximal hamstring tendinopathy ?

The main symptom  is pain in the lower gluteal region which can sometimes refer down the hamstring into the back of the leg. Pain  is often felt mainly with  running at a faster pace in sporting populations  or while sitting for a prolonged time in non sporting people.

It often appears without any sudden injury and usually becomes worse over time with continued training and exercise.  There may also be a history of  repetitive or previous hamstring injuries in those participating in running related sports.

Clinically the following is often observed:

The shoe off test: simplest test for proximal hamstring tendinopathy you can do right now.

try to take off your shoe  by  pulling the affected legs heel back against the other foot, pain in the hamstring denotes a positive ‘shoe off’  test.

These are other proximal hamstring provocation tests that also form part of rehab:

Could my proximal hamstring tendinopathy be something else ?

This is why its important to get an assessment as there can sometimes be other diagnosis that masquerade as hamstring tendinopathy. Alternative diagnosis may include the following;

In rare cases that involve trauma there may be an avulsion fracture where the attachment comes away from the pelvis and in some very rare cases a stress fracture may be suspected.

As with a lot of tendinopathy type treatments the following guidelines apply:

Ideally when the hamstring has settled down as is not as irritable the most effective long term rehabilitation  is exercise focused.

The goal at this stage is to avoid compression but increase the load on the tendon. The simplest way to do this is with using static holds or isometrics.  The benefit of isometric exercise is that it may have an analgesic effect for tendon pain. Try 4-5  sets of 45-second holds at 70% maximal voluntary contraction for isometrics in this case.

In an irritable tendon we would normally start with isometrics only but often you can start with active strengthening as symptoms allow.

For return to sports we need to also consider restoring the dynamic strength and spring like qualities of the tendon .

This would include more plyometric based exercises such as alternate lunge jumps, hopping and bounding. Read more here about this training topic.

Do you need to alter running style and proximal hamstring tendinopathy ?.

Everyone’s running style is different and it may be that your gait does not need changing.  However there are certain characteristics that are seen in runners with this condition that increase the load on the proximal hamstring: 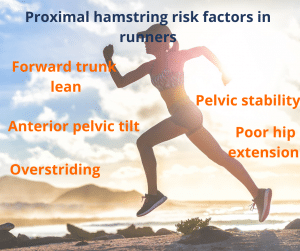 However if you do tend to overstride increasing your cadence may help along with the following tips :

You can get more of an overview of running technique and hamstring tendinopathy here at The running physio website.

When can i run again ? The recovery time for proximal hamstring tendinopathy. 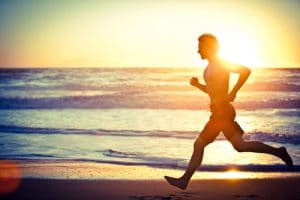 This is the million dollar question everyone wants answered. The best way to look at it is regarding How much you flare up and how long it takes to settle.

A good guide is no more than an increase of symptoms above 3-4 / 10  on a pain scale and settling within 24 hours, hopefully less. Anymore than this may be too much.

To start running I’d start off very conservatively, dip your toe in the water so to speak and build slowly over a period of time. Its good to work with your physio about this as everyone is different and some may get back to their desired level quicker than others.

Rehab is still important  during your return to running even if you are symptom free. We still need to develop and increase the tendons load tolerance to prevent recurrence and build you back to the levels you want. Tendons are slow to build up strength compared to muscle and as such we need to persevere for longer.

Hopefully this helps you get on the road to recovery. If you are struggling with this condition please book in to see one of the team here

Previous Post
Getting the most from the rowing erg
Next Post
Are single leg exercises better for strength training in runners ?